The Outdoor Education programme involves all students from Shell (Year 9) to Upper Sixth taking part in our Combined Cadet Force (CCF) and their silver Duke of Edinburgh Awards as well as specialist sports. 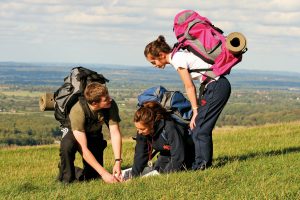 The nationally recognised Duke of Edinburgh (DofE) Award scheme begins with training in Remove (Year 10). All of our students take their Silver Award in the Fifth Form (Year 11) and Gold is an option in the Sixth Form.

The awards involve personalised programmes of activities in four (or five) sections: volunteering, physical, skills and expedition. There is a residential section required for the Gold Award. Many of the sections are covered in our timetabled outdoor education programme.

The Duke of Edinburgh Award Service Afternoon on Wednesday consists of DofE and CCF Army, RAF, Navy for the Fifth Form and above, with Community Service, Environmental Conservation and Recycling as an option.

The Service Afternoon for Remove (Year 10) on Fridays consists of Duke of Edinburgh and the Combined Cadet Force (CCF). 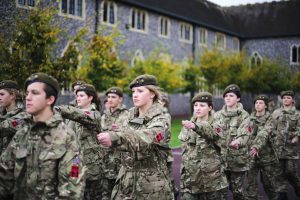 Taking part in the CCF promotes personal responsibility, leadership and self-discipline. It is compulsory for all Remove (Year 10) students to take part in one of the CCF divisions, and is then optional in subsequent years up to the Sixth Form.

The Hurst CCF is one of 260 school contingents and is an educational partnership between the college and the Ministry of Defence. We are proud of our CCF which is one of the oldest in the country. Hurst College was one of the first six schools in England to establish a corporation in 1860, and the only public school corporation in Sussex for 36 years.

At Hurst our Equestrian opportunities are expanding. We have a team of around 40 pupils who represent the College in Show-Jumping, Dressage and Eventing at local and national competitions, including the National Schools Equestrian Association (NSEA) Championships. There is something for everyone, whatever the discipline, from beginners up.

As part of the school week we offer weekly training sessions at Hickstead during the summer months and at an indoor venue, in the winter. International Show-Jumper and Eventer, Brian Cassidy and Harriet Upton respectively, have come on board as our team trainers.

Pupils who are interested in representing the College in the equestrian team, must have their own or be able to loan a horse/pony. To compete in a NSEA competitions they must be registered as a Hurst pupil with the NSEA.

We have close links with the world-famous All England Jumping Course, Hickstead, taking pupils on trips there during the Derby Show and have the sponsored the National Schools, Pony Club and NSEA Show-Jumping Championships in August, since 2009. These links have grown as we now host our weekly training sessions here in the summer months.

Each September we host our annual Invitational Schools Show-Jumping Competition at Hickstead.

The Outdoor Education department offers a wide range of outdoor and indoor sports and pursuits. Students can choose to take part in specialist sports during timetabled games sessions on Mondays, Tuesdays and Thursdays. These include, climbing, water sports (kayaking and sailing), mountain biking and skiing. 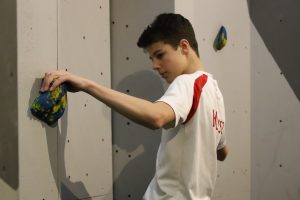 Climbing is a hugely popular activity and Hurst has a a fully equipped climbing wall with top rope climbs, a bouldering wall and cave. During the Spring and Summer students have the opportunity to travel further afield to climb at some of the many outdoor climbing spots in Sussex and the South West of England. The department also runs various weekend trips for students who want to gain a wider range of climbing skills. Hurst has qualified ski and snowboarding coaches who cater for all ages and levels and two ski trips a year are offered to students.

Hurst has a competitive Ski team who have been hugely successful in the Independent Schools Skiing and Snowboarding Championships (ISSSC) in recent years. The team also competes at the British Indoor Schools Ski (BISS) competition and our students enter individual events throughout the year.